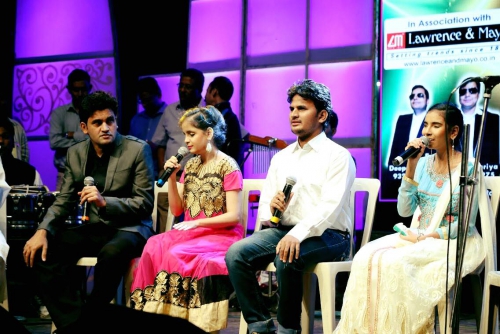 Keval and Deepak in 2005 had just passed out of college, waiting in the long queue for the Government's employment bureau list of 70 lakhs unemployed educated people waiting for non-existing jobs. But the conversations they had between each other didn’t centre around disappointment or frustration... See More

Keval and Deepak in 2005 had just passed out of college, waiting in the long queue for the Government's employment bureau list of 70 lakhs unemployed educated people waiting for non-existing jobs. But the conversations they had between each other didn’t centre around disappointment or frustration but instead, they were optimistic and saw the glass half full. In a literal sense, they didn’t have sight, but they did have a vision in creating a group for anyone who faced the same faith as them, as both believed there is a lot of talent around, and all that is needed is an opportunity for these talents to shine. On 2005, On December 19th Udaan did their first show with 15 artists. Currently, they boast a troupe with over 60 talented artists. Udaan believes in inclusivity hence, their talent list is unaffected by caste, creed, or geographical boundaries. Uncompromising with the standard of performance, Keval and Deepak have uncovered raw talents throughout the country, not only limited to their home city of Mumbai but even in the different rural areas of Maharashtra. Their portfolio includes Evergreen and latest Bollywood music, Bhakt Sangeet, Jain Stavan, Ghazals, Qawalis, Marathis film songs, Marathi Laavani, Marathi Bhaktigeet, Superhit English numbers, Track singing, Wester classical performances, Jazz, Fusion, Soft rock, Instrumental music for the reception and corporate vents, and the list goes on. Udaan has collaborated with Shreya Ghoshal, Sunidhi Chouhan, Shaan, Alka Yagnik, and many more. They have also been featured on television shows like Comedy Ka Daily Soap - Sony, Ek Se Badhkar Ek Jalwe Sitaron Ke - Zee, India’s Got Talent - Colors. Udaan has been backed up, aided, and cheered by Superstars like Salman Khan, Sonu Nigam, Jackie Shroff, Juhi Chawla, Dharmendra, Anupam Kheer, and many more, of which many of the stars have organised shows for Udaan. The long list of Patrons Udaan has is just a testament of the immense talent the group collectively holds, and their long list of accolades like performing throughout various states in the country, to touring abroad in cities like Los Angeles, New Jersey, Chicago, New York, Tampa, Atlanta, Orlando makes Udaan one of the most experienced and talented group for any talent seeker or event organizer to have.

No Products in Cart